Skip to content
As mentioned in the last entry, I’ve been meaning to write about hate mail.
I’ve never pushed this blog too hard. I post it on facebook and on my twitter feed, that’s about it. It’s personal in nature and not for everyone, and I figure if people are meant to find it they will. It gets 2500-3000 hits per month, which is already more than I ever imagined it would.
I like being a small fish in a big pond. As much as it appears that I love attention, which I do, I only really like attention that I can control. Meaning I love attention from friends who love me, I’m terrified of attention from strangers who hate me.
When things were heating up with Cycle Sluts from Hell I loved being on big stages playing to large crowds. I loved the exchange of energy that comes with a good show: people wanting to touch you, the fists in the air, the feeling of being all powerful, the feeling of connection. My id dancing with your id. I did not like one on one conversations offstage with people asking me about myself and my band. I felt too exposed and would usually crack jokes to deflect attention. When out of my element, I often came off cold and bitchy, which still happens sometimes. It’s a defensive posture. i was so shy as a kid that I literally couldn’t get words out. I wanted to speak, my mouth wouldn’t work. In adulthood it manifests into a sort of insular way of behaving toward strangers. Many people I know have anecdotes about how coldly I behaved the first time they met me. I do a lot of apologizing.
But now I’m grown up and better equipped to not be an asshole when a new person tries to talk to me. Although my sister still hisses, “Be nice!!” under her breath when making introductions. And with the maturity of age you would think that I would be a little thicker skinned. But I’m not. Any little bit of not-nice mail sends me into a nervous tizzy. I have people out in this world who dislike me, but I know most of them and I think they’re jerks too. And I don’t have to hear from them. And that’s the way I like it.
So cut to the meltdown or whatever I can call the last year and a half. From the outside it looks like I left my amazing, hilarious, loving, handsome, kind, generous partner of 13 years for no reason for a boy young enough to be my son. If I had money I’d probably be driving a new convertible sporting the female version of hairplugs, whatever that might be (long blonde extensions?). This guy knows… 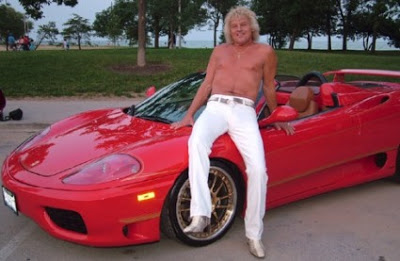 That’s from the outside; the truth is far more complicated and agonizing. But the end result has been the same. I couldn’t write, sleep, was manic and drinking too much, acting out. Some of Drew’s friends hate me. I can see people giving me the side-eye when I’m out at shows, predatory women stalk my blog and facebook page looking for ways to get to Drew. My family clucks and discusses crazy me over dinner. I’ve always been the crazy one, no matter how hard I try to be good. I’m like a much sluttier and less chipper version of Maria–no asset to the abbey whatsoever.

The jig was up. I finally had confirmation about what I’ve always secretly believed to be true– that I am a psycho, faithless, off-the-rails, selfish piece of shit unworthy of love.
And because I was bleeding this self-loathing out of my pores, bits of mail started rolling in to substantiate the energy being exuded. In the space of a few weeks, and at my lowest point, I got a facebook message that stated that I should eat shit and die. I got an anonymous comment on the blog, from someone who clearly knows me, calling my writing maudlin and juvenile and advising me to take a break from writing altogether. And lastly I got an email from Drew’s sister stating that he hates me, that my behavior was ugly and despicable, my friends mere mindless groupies too afraid to tell me the truth about my low nature.
That last one put me in bed for two days. It was actually Drew who talked me back into a vertical state. And Drew that I keep talking to about what happened. How did we get here? Who am I? Who are you? Why am I destructive? Am I hateful? Why do you love me? How do we find our way to peace after all this devastation? Then my mother sent me that email I posted in the last blog and the fog lifted. I am burning off shit that I’ve been carrying my whole life. I have made the choice not to rise any higher with my writing or (in the past) with my bands because I have felt unworthy and fearful of exposure.

This isn’t maudlin. I don’t feel sorry for myself, I’m grateful to finally get clarity.This is life and I am writing about it because I think most of us feel the same way and we need to talk about it. We need to come clean and support each other.

I love that line in the Black Crowes “Cursed Diamond”, I’ve quoted it here before: “I hate myself. Doesn’t everybody hate themselves?”

One day recently I freaked out on Drew. I’d been clinging to this notion that he was perfection and I was the opposite. I’d been dragging around my Catholic chains and apologizing all day, every day. My bad, my bad, my bad, I am bad, I am bad, I am bad. He said some things about his new girlfriend that set me off and something clicked. I felt like Travis Bickle. This is a woman who would not take it anymore. He wasn’t perfect. There were a lot of things that he did/wasn’t doing that helped create and exacerbate our dysfunction. He was half of the equation. I wasn’t evil, I just didn’t know how to fix it in the moment. I wasn’t raised viewing healthy relationships. Neither was he, so we both went to our comfortable, fucked up corners and I was the one who finally said it couldn’t go on the way it was. What a revelation. And what a gift to be able to talk to someone so candidly after so much damage and sadness. We are speaking more deeply than we have in years.
So, for the first time in my life, I feel ready to start working on steppng into more light, and I’m ready to face outside internet hatred without ingesting it like sweet antifreeze. Maybe that’s the lesson in this excruciating chapter. I am a cursed diamond, which is way better than being the garbage I thought I was. So tell me you hate me in an anonymous email and I will counter that with maybe you’re not so great either, and I have a whole crew of mindless groupies who would beg to differ. And that’s pretty cool.

Much love to you my friends. All your flaws and foibles are what make you interesting. Perfection is boring and it doesn’t teach us anything. Don’t let the haters tell you any different.