There is that saying that it’s none of our business what other people think/say about us. I believe that’s a pretty healthy way to approach life and social interaction. There is too much biased and sometimes completely untrue garbage spoken about each one of us that only wounds us unnecessarily when heard. It’s always a limited interpretation from the outside, like that parable of the blind men and the elephant.

I try to be as open as I can in conversation and online because I value honesty and I prefer that information about me comes directly from me. I know it won’t always be received as I would like, but that’s the chance taken. I also feel that an openness about my “journey” (barf) is helpful to others who may be having similar experiences. I get a lot of emails from people thanking me for articulating their thoughts and emotions, and that’s the payoff for me. But writing about personal experience is tricky because it’s nearly impossible to exclude opinions and details about other people. None of us live in a vacuum. So while I try to be loving and protective on this public forum, I have my own dislikes and discord, like anyone else.

I am in the process of regrowing a protective skin after a long period of having everything painfully burned off, down to muscle, down to bone. I cry easily and don’t enjoy battles the way I once did. Conflict makes me anxious. I don’t necessarily mind being so raw; it’s certainly healthier than walking around with the gut full defensive rage I once carried. It’s made me kinder and more understanding of other people. But it also makes my somewhat public persona a liability at times. Lately I haven’t posted links to this blog on Facebook or Twitter because it feels safer to stay low-key.

On my last day of summer vacation at my mother’s home in Michigan, I woke up to have an exchange on Instagram that felt pretty devastating by the end. I was called embarrassing and desperate, and someone who knows me better than most and whose opinion I value highly was said to be included in that opinion. 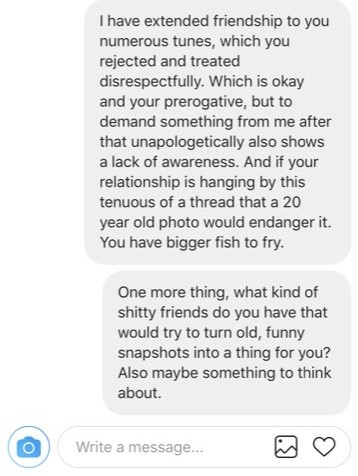 [Ed. Note –  Okay, I will admit she has a point with the relationship crack]

Admittedly, I fueled the fire by not reacting as gently as I could have. And I know where she’s coming from because I could have easily sent something like this when I was in my 20’s. But it was early in the morning and it felt like an attack out of left field from someone who has never been great to me. So while I wasn’t fully rotten, I didn’t hop all over apologizing either.  Also, I should probably note that we’re talking about 3-5 photos posted over as many years, and nothing had been posted too recently. I was half asleep and completely unprepared to compose a kindly older lady response.

It’s taken me a couple of days to regain my equilibrium and consider the source, which I have definite opinions about, but in the interest of operating as close to loving as I can muster, I will keep them to myself here.

What is more of note to me, and the reason that I’m still thinking about it, is that I felt more hurt than the situation warranted, and all of a sudden vulnerable to the world. Does everyone see me as embarrassing and desperate? Does someone I trust with my innermost thoughts and have been friends with for decades think this of me? Is my self-identity a lie? I thought I was posting fun old photos that are a part of history and of interest to friends. But maybe I don’t know my own motives? I know for sure that I don’t want anyone’s boyfriend, especially one that I’ve already had. Still, I couldn’t stop myself from internalizing words that seem designed purely to injure, words that were self-serving lies, words that left me feeling nauseated upon ingestion. Literally–I felt like I had to throw up and couldn’t eat all day.

Happily, I have a beautiful, loving, group of friends that are kind, honest, wise and hilarious. I sent the exchange to a couple of my closest female friends, and they immediately understood my feelings without question. We talked about how we had each experienced hurt and frustration at the hands, or words, of this person. The screenshots triggered one friend into realizing that she too had felt abused but was so busy trying to keep the peace that she had never admitted it to herself. Then I sent it to Sam, somehow a constant voice of reason for me, and he said : “You’re being gaslighted”. And then he asked if I was okay and what he could do to help me feel better. This concern and rallying from all of them helped me feel safe and normal again.

Interestingly, at the same time that this all went down I have been in the process of reconnecting with a friend who I thought I would never speak to again. The falling out, partially due to the words and opinions of other people, was so big that we were lost to each other for years. Then we ran into one another by chance and all of the anger/mistakes of the past fell away. I just saw her smile and the warmth in hr eyes. All those bitter words floating away like dust. I can’t help thinking the timing is not coincidental.

So why am I posting this here now? I don’t want to perpetuate negativity. I don’t want to injure my friend, no matter how questionable his taste in women might be. I am not angry or sad anymore, and at the end of the day, after I calm down and stop reacting, I very much want to operate from my higher self. So now I’m simply curious about the mechanisms of who we think we are, who others see us as, and how we navigate a peaceful existence between the two without forcing ourselves to become numb or shutting down all social media.

On this journey of the last few years I have been forced to jump headfirst into the murky water of disdain by someone I thought would always love me. The Universe has shoved me repeatedly into finding a way to stand up and get through painful moments in the face of loss and harsh judgment, my own and others. I wouldn’t wish some of it on even this particular Instagrammer, but at the end of the day, I’m grateful. The more I am forced to face my fear and shame about myself, the less I have to hide from the world. I feel pretty open right now, and so blessed by the love that I do have around me every day. The rest, really, is just noise.

So I bless her for bringing me a lesson this week. And shout out to the insanely awesome Melody The Metal Yogi for showing me this quote.