Well, virtually anyway. www.raffaelemary.com is the new blog address. I am taking stock of all ways that I have held myself back financially/personally, and one of them is that I’ve never properly monetized the blog as its stats have risen. So here it is.

I apologize to those of you who subscribed to the Blogger site, you’ll have to do it again here.

I also have to go through all the old blogs because the layout got screwed up on some of them in the exporting/importing process.

In the meantime, here’s a cute kitten video so this visit won’t feel completely pointless.

Truthfully, I didn’t like Elyse during the first few years we knew each other. She picked a fight with me from the get and I’m sure I didn’t handle it as well as I could have. I hated her for a while. But the beauty of being “our age” is that most of the childhood petty disagreements, usually due to insecurity and ego, smooth out with time. I understand now that she both liked me and was jealous of me, and didn’t know how to handle it. I understand that I was equally insecure and couldn’t handle anything I perceived as an attack without going hard on the defensive.

Luckily, Elyse and I reconnected on Instagram last year, and it was a beautiful exchange. We became real friends finally, veterans of the rock and roll war, ego stripped away, just two old broads catching up. She was so open and funny and smart, I wished that we could have been closer a long time ago, so much wasted time. But things are what they are and you take what you can get.

I had to go back and look at what I’d written about her for “the book”, and I found this chapter. I will post it here and then after post our instagram exchanges so you can understand how great the shift. I am ever fascinated by the way feelings can change in a heartbeat. I do not purport to have known Elyse as well as her closest friends, her husband Greg, but I do feel a lot of love for her. I am so sorry that she suffered for even a minute, and am so grateful she took the time to share a portion of the journey.

Now I wanted to set her on fire.
[Interesting side-note bit of trivia–Jesse Malin was driving that van and confirmed the story from his point of view many years later.]
Curt was fired from the band after that gig. He was not a great bass player and his drug habit didn’t work in his favor. I pointedly ignored Elyse and Greg whenever I saw them out, which was often.
One night I ran into them, of course when I was at my most vulnerable. As one of the few responsible people working for our rock and roll home base Lismar Lounge, I was often obligated to close out the bar at 4 am. I lived two blocks away and would wait up watching movies, then scoot through the streets as warily as possible, praying for safe passage. On this particular occasion I had put rag curlers in my hair and just didn’t feel like keeping my makeup on until going out in public. Usually there would be no one left in the bar. I pretty much looked exactly like this, except there was no smile. I probably had that same forehead zit.

Photo courtesy of https://sarahforshaw.wordpress.com/tag/rag-curls/
This time there were at least four or five people in the bar, two of them being the dreaded Greg and Elyse. Ugh. First the cane waving, now curlers. It was too humiliating. I leaned against the ice machine, not looking at them, praying they would leave.
Nope. Elyse walked up and stood in front of me, forcing me to acknowledge her. I turned my head to face her. She was shaking, so tiny, and said, “Hey Raff, I don’t know what happened between us, but I really am sorry about your foot and I wish we could be friends again.”
I looked down at her, mortified. I could see the rags in my peripheral vision. But at least I had a little height on her, especially since I tend to stand up stick straight when uncomfortable. I was practically bending backwards at this point.
I said, “What happened, Elyse, is that you cut my ankle open, which caused me much pain, loss of work and a hospital bill, gave me $40 for it, and then asked for that $40 back.” I couldn’t even get into the hair pulling and constant mocking that had ensued around that.
I can’t remember what her response was, I think she had forgotten that she asked for the money back. She seemed so contrite and nervous and sincere that I had to let it go. I told her it was fine. After that, although guarded for a long time to come, I said hello when I saw them and eventually became friendly enough to appreciate the wicked sense of humor underlying much of what they did and said. I still think of her whenever my fingers happen to pass over the scar.
—————————————————————————————————
That was written quite a while ago. Then Elyse sent a message through Instagram in October of last year. I cut a few things out of our exchanges because they’re too personal… 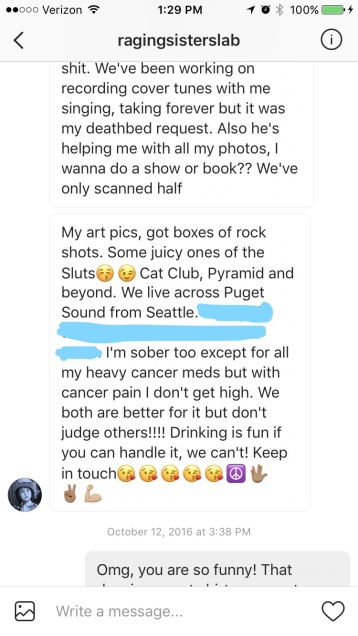 I feel it now too.

One of the last things she wrote on Instagram was this:

“I’m sorry people but I fear the count down for Scotty to beam me up may begin soon. I still have more treatment but I’m wee, but am wicked, we’ll see. What ever happens remember Raging Slab and I love you. Always reach for your dreams and that’s an order!”

What a champion firecracker she became. Ballsy from start to finish. Rock on, Sister Shining Star. I’m grateful for every last second near you, good and bad.

My name is Mary but everyone calls me Raff or Raffaele. Raised in Michigan, moved to New York in the 80’s. I’m a former metal queen and used to sing for Cycle Sluts from Hell. I’ve slung drinks, managed clubs, wrangled fashion numbers, now I manage a promotion company with a store and art gallery attached. And of course write.