Skip to content
So many random things to talk about! I’m kind of bored of the deep stuff, so I’ll tell you a tale about the dating scene in NYC.

I will get a teensy bit serious for a moment, though, to say I’ve been sick for four days with a sore throat and sore tongue (?) that is now kind of drifting into a mild cough. And I am convinced that it is purely a mind/energy disturbance.

Fortunately and unfortunately, I live in a city where there is always something happening and I work in the center of those happenings. I bartend one night a week, I book rock shows, I manage a gallery with openings every month. There’s always some new and usually fun social obligation. I love having dinner and brunch with friends, I receive a lot of invitations and have many people I want to see. I also, when possible, want to include new or outside people who are eager to be included. I grew up lonely and insecure and I know how hard it is to live on the edge of the party. But sometimes it becomes an entourage of insanity. And because of my mom energy and co-dependent tendencies, boundaries get blurry. I find myself counseling needy nutbags at midnight, feeling pressure to answer long emails from people who want a private response to their opinions on my blogs, or fending off advances from women who think that making out with me will make them feel wild and free. Some of these moments are harmless, some rewarding, some draining.

And since adding the very popular Sam to the mix, things can be even more intense. So without getting into detail, I’ll merely say that one night last weekend was a giant clusterfuck of some serious soul-sucking in which both he and I walked away feeling violated. It was as if one person was a bird of prey: tapping, pecking, clutching, snapping, sleeve-pulling, needing the very core energy of both Sam and myself. If it wasn’t so stressful it would have been fascinating. When I protested I was met with tears, so I backed off and allowed myself to be emotionally manipulated to the point of exhaustion. And now I am sick. I honestly believe that my throat and tongue ache because I did not allow myself to speak up for myself out of fear of drama, of hurting someone, of being perceived as mean, etc. In the end I felt so grossly violated that I woke up the next morning feeling angry. I burned sage and frankincense and myrrh into a great billowing smoke fog in my apartment to fumigate myself and my surroundings.

The end lesson for me is the same as usual with these things, I simply have to walk away and/or say no more often. I have to protect myself the same way I would a friend.  It’s really not that complicated, just another aspect of learning self-love. I’m mentioning it not because I need any more advice on energy vampires, more to simply state to the Universe that I am no longer allowing my fear of being disliked to keep me in the muck. Enough is enough.

Now, on to the dating tale.

I have a friend who is really good at dating. She attracts wealthy men like I attract clingy maniacs. Last time we went to a show we were seated at a group table and within ten minutes some yachting mogul was sharing his French fries with her. It’s really fun to watch.

She met a wealthy, attractive, fun, professional guy on Tinder, and although she wasn’t intent upon being exclusive, thought that he could be a good possibility for down the road real boyfriend material. They went to dinner a couple of times, had little daytime adventures, slept together after a few dates. It seemed like a nice fit. He booked a vacation for the two of them on a tropical island. She was happily working on a mental packing list when she got this via facebook: 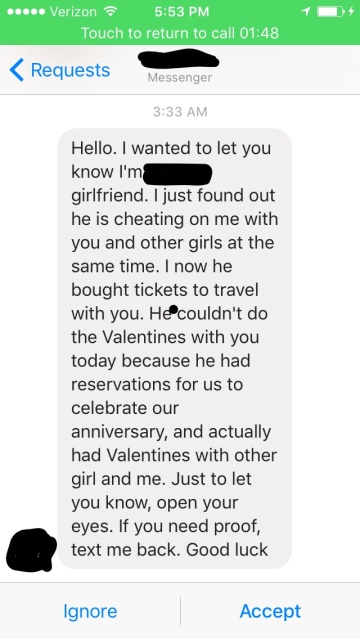 Since the message came in at three am, my friend wisely waited until the next day to answer her. The girlfriend, a nurse from a sexy South American country, called her immediately and said that she had suspected him of cheating for some time, so she put a pill in his drink (!!!) and went through his phone while he lay comatose.

“Nothing that would hurt heem, Dahling, just to make heem a teensy bit drowsy, you know…”

I have done my fair share of suspicious girlfriend sleuthing throughout the decades, but I doff my fascinator to this crafty woman for taking it that extra mile. I might also mention that I have a hot-blooded friend from this particular part of the world, and I would say don’t mess with these sassy beauties unless you’re willing to experience some excitement. And, it seems, an occasional dosing.

The girlfriend went through everything, taking screen shots, charting out names and dates, places and times. She put it all on a calendar. She knew about the vacation, she knew where my friend and the man sat in a particular restaurant, she knew the address of the apartment he held his trysts.

Because as it turned out, this man lived with this girlfriend. And the pad that he had called his own, that he had brought my friend, was an apartment that he and a male friend rented for this particular use. Like something out of an old movie, The Apartment without noble Jack Lemmon keeping things from getting too sleazy.

My friend was flummoxed. She is no dummy or naïf. She did get a little suspicious when he first suggested renting a hotel room, but when she refused he came up with this apartment on the next date. So her spidey senses were assuaged. She really like this guy. He seemed normal, honorable, attractive, responsible. He had an ex-wife and kids that he saw regularly. He had a dog that he loved. He even placed a dog bowl in a conspicuous spot in the apartment to make things look more natural.

The day after she spoke to the girlfriend, she received this from him:

Both the man and his girlfriend hammered her with messages for days, each claiming the other was lying. Some quick facebook sleuthing backed up the girlfriend’s version. My friend wisely bowed out and told them to work it out between themselves while she sadly mourned the real loss–that romantic tropical vacation.

This was a couple of weeks ago, yesterday the girlfriend sent her a text to say hi and ask if she had heard from the man. I told her to block their numbers.

There is no moral to this story. I just think you’ll find it entertaining. Men, if you’re prone to cheating, don’t do it with passionate women with access to drugs. Ladies, it appears it’s still a jungle out there. Check the closets when he goes to the bathroom.

One thought on “Post-Apocalyptic Adventures in the Big City”

My name is Mary but everyone calls me Raff or Raffaele. Raised in Michigan, moved to New York in the 80’s. I’m a former metal queen and used to sing for Cycle Sluts from Hell. I’ve slung drinks, managed clubs, wrangled fashion numbers, now I manage a promotion company with a store and art gallery attached. And of course write.