For weeks now I’ve been thinking about how people define themselves, and if or how that could alter our destiny.

I have always resisted labeling myself, primarily because I still don’t know what I’m supposed to be when I grow up. Plus I think it pigeonholes people, as no one is just one thing. I hated it when I was outside my office job and someone would say, “Oh, that’s Raff, she’s a bookkeeper.” Ugh. So unglamorous, and it totally negated all the other stuff I am. Part of me wanted to shout, “But I’m also a good pet mom and I can write decently and I was once a rock star!” But no one wants to hear someone’s lengthy life resume upon introduction, so I’d just wave and smile tightly. And even if a stranger probes around for more details from me, I’m unlikely to hand them over willingly anyway, because (self-examining, too-much-information blog notwithstanding) I hate talking about myself to strangers. It makes me feel squirmy and overexposed.

And once you tell people outside of the rock and roll circle that you were once a rock and roll singer, it gets goofy: “Oh, that sounds exciting! Did you play bass? What band?” And you say, no, I sang, and well, there were a couple, the biggest one was Cycle Sluts from Hell, and they roll their eyes and say, “Woo! Well, that is quite a name, missy. So all righty, what was that like?” And then you have to go into this abbreviated version of a life-altering event chain and it’s tedious and embarrassing.

So now that I’m a bartender again, I have moments where people will be sitting in front of me talking about bands I know personally or how they’re super old school because they’ve been in NY since 2003, or whatever, and I’m tempted to say something to prove I’m cool. Most of the time I don’t, because, well, that would be a sad and desperate way to function, and really, who cares? Is it that important to impress a stranger with my advanced age and knowledge of the East Village prior to the great real estate rape of the 21st century? They don’t give a fuck, it’s like getting a lecture from your parents.

And then other times on a Saturday night people will be dancing awkwardly in front of me in those ubiquitous blue striped shirts to say, “Shout” for the nine millionth time this year, and I will think, “Wow, I am a complete alien right now. I have lived an entire lifetime of adventure that these yutzes couldn’t begin to understand.” 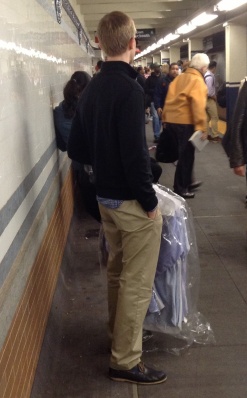 (I counted. This guy, although I think he’s pretty adorable for a preppy type, was carrying 7 identical blue striped shirts.)

But then my second thought is, that’s ridiculously egocentric. Maybe they have all kinds of experiences, or will have experiences, that I can’t know or understand. We’re all the stars of our own lives, and who is to say that what I find important or cool is really the most important and/or cool? It’s all relative.

Anyway, so now that I’m back in the bars and working like an hour a week on a book and writing this blog when the mood strikes me, I have been kind of cheerfully free-falling without any real idea of what I’m Supposed To Be Doing. I knew I couldn’t sit in an office managing someone else’s money while people screamed at each other over my head for a minute longer, but now that the regressive year of screwing around and working as little as possible is almost up, perhaps it’s time to act my age.

Or maybe I’ll just coast like this for the rest of my days? It’s entirely possible, although the thought terrifies my long-suffering boyfriend.

Over the last couple of weeks I’ve hung out a lot with with one of my besties Storm Large, because she’s been in town to sing at Carnegie Hall, which was a major career milestone, then she did a solo show at Joe’s Pub, and tomorrow is singing with Pink Martini for a benefit at the Central Park Zoo. It’s pretty obvious that she’s got it going on career-wise, and her labels are very clearly defined, she is a critically acclaimed singer/ performer/author, and can announce herself indisputably as such. We always talk about what the hell I’m doing with my life, because she believes in my talents and really wants me to move forward. She was one of the people who pushed me to quit my day job, now she’s pushing me to behave like a proper writer.

We got into the whole “but who am I?” conversation and she said, “Dude, you’re a writer. You just are. You have to start identifying yourself as one and get on with it.” And I did my standard dance of, oh, well, it’s only my little blog and I don’t have a book out and may never have one and blah, blah, and then I heard myself and realized that I really need to STFU. How we choose to define ourselves is really, who we are or who we become, to the world and to ourselves. It propels in directions, or conversely, holds us back if we label ourselves incorrectly.

And then I remember that another awesome friend, Chloe Valentine, had recently referred to me as an artist. I.e., “Oh, well, you’re an artist and it’s a difficult path and you can’t force your creativity…” I felt so happy to be referred to as an artist. I’ve never thought of myself as such, even though I’ve spent my life creating and being drawn to creative people. There was even a point when I started learning business-ey things like Excel and database management that I thought maybe I was born to organize for creative people. I guess I always thought of an artist as someone well-defined and earning a living as a painter, or a singer, or a writer who, you know, doesn’t play video games and take constant photos of their cats on their days off from work. 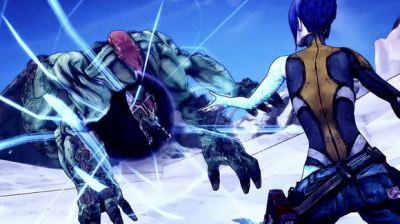 I think many of us, especially women, impose a certain modesty upon ourselves that doesn’t always serve well. We don’t want to toot our own horn, to make others uncomfortable or be seen as an egomaniac or an asshole. We want to be nice. I guess the trick is to know when it’s okay to state who you are, and when it’s better to sit back quietly and let the blue shirts talk about a friend’s band unfettered. Anyway, think about it. Who are you? Who do you want to be? Where are your true talents and do you let them shine? It’s time we all got on with it. I’m planning on it as soon as I max out to level 60 in Borderlands 2.

“It is never too late to be what you might have been.” –George Eliot