2013! How did it get here so fast? I remember being a little kid and talking about how old we’d be in the year 2000, when people would be using flying cars and robot maids. It seemed a million miles away.

I haven’t had much burning in my brain to talk about, but it seems like it’s time to get a new year’s blog out, so I’ll just wing it and see where we land. First, PUBLIC SERVICE ANNOUNCEMENT for all my ladies and my gays:

My gorgeous and only slightly batty friend Codie Leone has a friend who is a top notch aesthetician, who recommended that she get a nuface machine, which is a little handheld device which zaps the facial muscles into shape. Sort of like this for the modern age:

I noticed Codie looked very refreshed, so I forced Drew to order one for me for Christmas, even though he’d already blasted out his credit card on some other items I just had to have. He’s a very good boyfriend and luckily for me he finds this kind of nonsense entertaining. Over the years he’s purchased a laser hair remover, a sonicare face cleanser, a sonicare eye serum thingy, and a series of well-marketed and overpriced creams and potions, all with a minimum of grousing.

I’m gonna post a video of him rocking out to show my nuface gratitude. He’s the drummer:

So, I have been zapping myself since Christmas day, and have noticed a difference. Zoe got one and she sees it too. I recommend that everyone…ahem…of a certain age…go out and get one immediately. Don’t say I never did anything for you: http://mynuface.com/

In my mind, this whole 2012 cosmic shift hooplah has been a bit of a bust. I am regularly immersed in readings and channelings through my loved ones, and was hoping for something more dramatic. Alien visitations, not having to use currency anymore, people suddenly being less selfish and obnoxious, or at the very least having the ability to see auras or losing the red states to secession. Alas, I am still in my tiny apartment, watching my beloved neighborhood get eaten alive by NYU students, and arguing with near-strangers about politics on facebook. One website promised big heads to hold all of our new-found knowledge and energy, I still have a pea-sized head. Although this one is not such a disappointment really.

But things are good. In 2012 I lost a little weight and got free of some major energy vampires. I quit my day job and free fell into a new, scary but fun place. None of my animals need vet care at the moment. I am happy. I like my life, I am healthy and surrounded by people who love me and are good for me. This is because I have been fortunate and because I learned how to make better choices for myself. Once, I wasn’t any of those things. And it has occurred to me, as I run a little machine over my face like Norma Desmond, that middle age isn’t nearly as bad as our youth-obsessed culture portends.


A former bandmate posted these photos on facebook this week, that’s me in panties and a bra and not much else, looking like a low-rent Cher from behind: 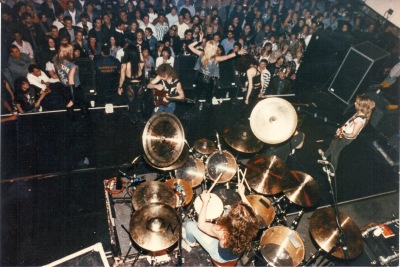 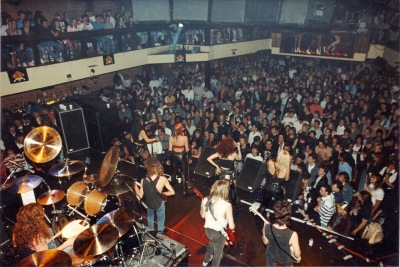 Hammerjacks (best rock club ever), Baltimore, 1989. The photo surprised me for a minute. Holy cow! There I am, in my underwear, in front of a sea of people who paid good money to be watch me “sing”. I lived this on a daily basis for a while, but in some ways it feels like another lifetime. I remember that it was exciting, and fun and adrenaline-charged. But I couldn’t fully feel it. I hated myself, and when I got offstage at many of these shows I had a a guy waiting for me who would do nothing but a lot of drugs, tell me that I sucked, hit me up for cash, make rendesvous plans with the waitresses behind my back, and abuse any male fans who came near me. I don’t blame him; he hated himself too. I forgive him for being a crappy boyfriend and forgive myself for choosing such a crappy boyfriend. I did the best I could with what I knew at the time, and still had a blast through much of it and consider myself so lucky for the experiences. I’m just saying that sometimes what we THINK should be the pinnacle of success and happiness really might be outer programming which has nothing to do with the truth of what our soul seeks.

I saw a fascinating interview with Caroline Myss recently, and she said much of the pain that people experience in life comes from coveting a path that isn’t our own. Meaning that we can’t all be mega-rich pop stars with Bentleys and public adoration, no matter how many affirmations we say. I have never coveted that path, although I did walk a parallel line next to it. My main goal as a teenager was to look cool, to get near rock and roll, and to get backstage easily.  I just overshot it a little, and gained a great education in the process. Anyway, what she has to say about how to find our path is brilliant: http://www.huffingtonpost.com/2012/09/29/super-soul-sunday-caroline-myss_n_1922777.html.

We’re always on the right path, even if we take some side streets into suffering. My mother says that it’s all tools for the cosmic toolbox, and once you learn a lesson, you don’t have to take that class again. Although I would add that in my experience you usually move on to advanced courses in which the same lesson shows up looking a little classier. like same douchey boyfriend behavior but this time he has enough money to buy new boots instead of repairing the old ones with duct tape. Or is that just me?

Once in a while I’ll get an email on facebook from someone asking life advice. I love to give it, although I have no illusion about my genius and most of the time just throw my own examples against someone else’s wall until something sticks. I know that people can hear information over and over again, but until they feel fully what they’re in body to experience, and learn it in their being rather than their brain, the information-giving is only marginally helpful. But I’m glad to be there for moral support.

So yeah, 2013. Maybe there is a shift going on and I’m simply being petulant because I don’t have a giant head full of cosmic knowledge and I’m still worried about rent money from time to time. My shift has been occurring over a lifetime, and as this new year enters I think about everyone out there who is hurting, animals and people, and pray that their shift is happening too. I feel like sometimes I dance around in my own newly cheery world and forget what it’s like to be out there, sometimes through no fault of one’s own. I wish you all a release from all that wounded you in 2012, and a happy new beginning full of love and light. 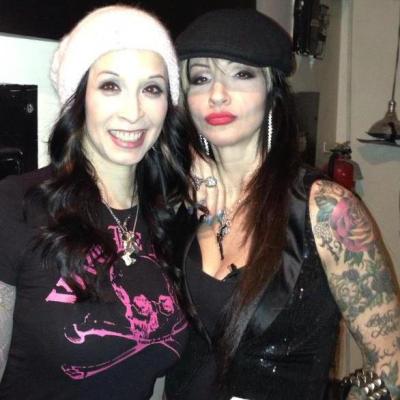