Skip to content
I frigging love my current nail salon, so much so that I’ve been meaning to blog about it for weeks, but I’ve been so busy with work that I haven’t had time. My job at PF, although I put in notice, doesn’t seem to be coming to an end. I think my bosses have opted to pretend that I didn’t quit. My new job, which is a return to one day of bartending at Bowery Electric, has more fun that I expected. My friend Tim Greer is DJ-ing and running movies for me and I get to see friends more regularly, but it still takes another day out of my schedule. And then Zoe and I did our show, which was well-received and also fun, but draining. So essentially my plan of making more time to write is currently taking it’s sweet-ass time to manifest.
Okay…ANYWAY…fingernails. Nail salons in my hood have become increasingly expensive and the girls working in them less versed in anything other than the most rudimentary of manicures. I was having trouble and spending too much money, and my lovely friend Ms. Codie Ravioli recommended her salon on Avenue D.
For those of you who don’t live in New York, Avenue D is hardcore. It’s not dangerous anymore, but it is home of the Projects and there are no white girls like myself walking up and down the Avenue. It is populated by inner city, working class Hispanic and black people and their numerous children. Most everyone communicates in Spanish.
So I trotted over there and found a magical land in which Christmas decorations stay up all year round:

This is one half of the room, the other half is exactly the same size, with giant, semi-destroyed, brown massage pedicure chairs. It’s tiny, and everything is covered in fingernail dust. It looks much cleaner in this photo than it should. All of the Korean ladies working here address the women, including myself, as “Mami”.
Everyone talks over one another in a shout, it’s very chaotic, and I fell in love as soon as I entered because I was seated on a pedicure chair next to a woman who looked very much like this: 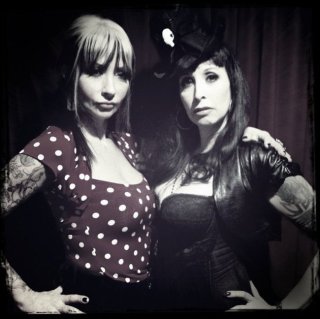 L. Z. HANSEN www.lzhansen.com
Zoe Hansen -Writer, performer, producer, mother and wife. Lover of outlaw life and the written word. Has been; hair and makeup artist, clothing store owner (Jezebella), streetwalker, junkie, part-time alt model, massage parlor owner and madam of five NYC brothels. During the second faze of her life, she has had short stories published in various anthologies, and online magazines. She’s cohosted a monthly reading series, has spoken at colleges about her life and addiction. Zoe continues to live in the East Village of Manhattan with her family, despite its gentrification. She is currently working on a chick lit novel titled ‘Going Down in Gotham,’ and a reality show.

MARY RAFFAELE aka RAPHAEL aka QUEEN VIXEN
http://darkladymissanthrope.blogspot.com/
https://twitter.com/MissAnthropeNYC
is an animal lover, anger enthusiast, half a fag, and never met a backstage pass she didn’t like. She is also a former metal queen and clubland personality who made a name for herself singing in the notorious Cycle Sluts From Hell. Now she works in the much more brutal world of fashion and is currently writing a memoir chronicling the misadventures of a Midwestern girl who moved to New York to seek glamour in the lowest of places. She is an occasional guest writer for Steppin’ Out NJ Magazine and publishes a blog that many people claim to actually enjoy reading.

RICHARD “HANDSOME DICK” MANITOBA
http://maniblog.tumblr.com/
Richard “Handsome Dick” Manitoba, born in the Bronx NYC, is best known for being lead singer of The Dictators, the legendary ‘70s New York punk band. He has sung lead for the MC5, and his band Manitoba’s Wild Kingdom. He has his own radio show The Handsome Dick Manitoba program in Little Stevens Underground Garage on Sirius XM satellite radio. Mr. Manitoba is the Proprietor of the world famous Manitoba bar since 1999 on Ave B in the East Village. He is a writer, – Punk Rock Book of List, published by Back Beat Books, written countless articles, and currently blogs. He has spoken at many colleges, and private institutions about his life, and his experiences as a musician for thirty five years. He is currently touring with his new band ‘Manitoba’ and working on a reality show. He continues to reside in the East Village of Manhattan with his family, as he refuses to cross a bridge to go home.

TAMMY FAYE STARLIGHT
http://www.tammyfayestarlite.com/
“Miss Tammy Faye Starlite…Sort of a Pia Zadoable look-alike who pulls off an alter ego possessed by Tammy Wynette, Jesus Christ and Wild Turkey…turned Cheap Trick’s Surrender into a Bible-thumping rapturous hymn….and brought new meaning to Bible passages, such as when he comes, he will come. Tammy Faye’s brilliant Did I Shave My Vagina For This? brought the house down, especially when she wiped away a tear while singing, it’s Saturday night, and I’m watching the tube, while he goes off to shave another girls pubes. All in the key of D – for divine ! Jesus would have loved it, before he sent her straight to hell. See ya there!”

REVEREND JEN
Reverend Jen is a performer, painter, playwright, columnist, Troll Museum Founder, underground movie star, open mike host, ASS Magazine founder and elf. She is a columnist for www.artnet.com and a former sex columnist for http://www.nerve.com/. Her books include Elf Girl (Out now from Simon & Schuster!) Live Nude Elf: the Sexperiments of Reverend Jen and Reverend Jen’s Really Cool Neighborhood. Her handcrafted books can be found in collections including the Whitney Museum of American Art, the MoMA Library and the Warhol Museum.

Rev. has performed and lectured in Europe, all over the U.S.A. and on the Astral Plane. Her live action TV show “Reverend Jen’s Really Cool Neighborhood” was voted best off-off-off Broadway Musical Comedy Theater by The Village Voice. She lives in the world’s only Troll Museum on Manhattan’s Lower East Side with her Chihuahua, Reverend Jen Junior, an actress and dog-clothes model.

FRANCIS R. HALL aka FACEBOY
Born and raised in Greenwich Village NYC, Francis “Faceboy” Hall has been performing for at least 38 of his 46 years of his existence. At age 8 he had the distinction of portraying Tybalt at P.S 41 in the youngest cast ever to present Romeo and Juliet in the original Shakespearean English. Majoring in Theater, he obtained his Bachelor of Arts degree with Honors a week after turning 20. A 21 year member of the Screen Actors Guild he is currently represented by the Abrams Artists Agency. His film, television and stage credits are too numerous to list. Contributions to the downtown performance scene include an over 13 year run of the multi-award winning, “Faceboyz Open Mike”. He is now the host and producer of Faceboyz Folliez, a variety show with an emphasis on, “bawdy humor and beauteous burlesque”. Faceboyz Folliez is quickly gaining a buzz including two features in The Villager and a Scene Spotlight in Time Out New York (links below). Of himself he says, “As an actor, activist, poet, director, writer and producer I wear many hats. This is good because I shave my head and winters are cold in New York City”.http://newyork.timeout.com/music-nightlife/nightlife/2652801/scene-spotlight-faceboyz-folliez-nsfwhttp://www.thevillager.com/?p=1929http%3A%2F%2Fwww.thevillager.com%2F%3Fp%3D1147

HEATHER LITTEER
Heather Litteer is an actress, singer and performance artist. She has made many daring film choices working with Darren Aronofsky, Jane Campion and Mary Harron. She has also toured in the US and internationally with avant -garde theatre Company Big Art Group (you can see their real time film matrix production in April 6-21 at Abrons Art center right here in NYC). Also in Late April and early May she is playing the evil Britny in Julie S.Caesar and The Real Housewives of Trevi by @LiveFeedNYC which premieres at The Ace Hotel. On March 20, 2012 she with sing her sexy Disco single “Moustache Ridin” with Apokalipps available on I-tunes. For more on Heather check out her website at heatherlitteer.com.

PAULINA PRINCESS OF POWER is a hilariously entertaining Drag Performer and comedian who has been performing all over Manhattan for over 15 years. She currently emcees all of the shows at Lucky Cheng’s and is a recent recipient of the prestigious Diversity Scholarship from the Upright Citizen’s Brigade.