Skip to content
I went to the Guns n’ Roses show at Roseland last Friday, and have been debating on whether to report it. Then today I found myself home alone in the office at work, which never happens since Ms. PF does not believe in allotting much floor space for things like offices or backstock, so there are too many people to find yourself alone at work…like, ever. Contrary to the fashion fantasy, there are 7 stations packed into one tiny, noisy, messy office. It’s a real joy when we’ve got interns rolling in and out and the phones are ringing off the hook. But today everyone is gone with a list of excuses that run from trade shows to hangovers, and the phones are remarkably quiet, so it seems that the Universe is practically begging me to sneak something in.
Handsome Dick Manitoba and his band Manitoba opened on this particular night, and as his gorgeous wife Zoe Hansen is the Patsy to my Edina, the Edina to my Patsy, she insisted that she wasn’t going unless he got me into the show as well, which was difficult as each member of the opening band got only one guest pass. Some wrangling ensued until an extra pass was conjured up for me, one of the members of the GnR band that we are friends with took pity on Dick’s domestic plight and added my name to his list. So I am extremely grateful to all concerned for being so generous, and this is the reason that I am somewhat reluctant to post a review that is not 100% positive. But it would be pointless for me to blog otherwise.
My affection for all things GnR has been well-documented in past blogs. I will sum up by saying that the band meant everything to me in the early days. I saw all the first New York shows–L’Amour in Queens, the two at the Ritz, one at that smaller side stage they used to have at the Garden–and in my memory they were some of the best shows I have ever had the pleasure of viewing. I remember standing in the audience at the Ritz with my mouth wide open, feeling like my hair was blowing back from the energy of the band. They were that good. But everyone knows this.
So now it’s well over 20 years later and things have changed. Axl essentially stole the name from his bandmates and performs with a band of hired guns. You can’t help but feel for Slash and Duff, even with their further successes it has got to be galling every time this tour rolls around. And who knows what Izzy is feeling these days, I always picture him on a tropical island with a tan and a blond. But I am happy for the musicians, as mentioned I am friendly with one of them and he is a major talent and I’m so glad he’s got a gig that can showcase his abilities and give him a proper paycheck. I don’t begrudge any one of them their talent or their livelihood. And I was very excited to see Manitoba open and have a night with my girl listening to songs I love.

So here we go–

Zoe and I got there, waved our VIP stickers around and shouted, “The old whores are here!” We made a half-hearted attempt to get backstage and were rightfully rebuffed, then tottered about on our heels until we found a prime sitting spot–a table at center mezzanine just over the sound booth (always a sonically promising place to plant yourself). Let the cocktailing begin! “Oh waitress! Over here, Darling!!”
This is how we began. Dignified. Ladylike. 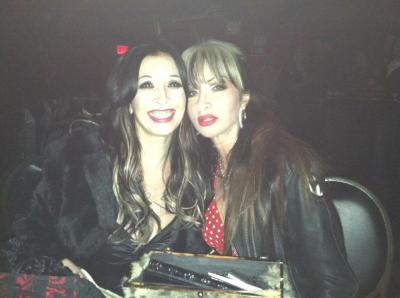 Manitoba killed it. I was so happy for them. The band was super tight, Richard is very comfortable onstage and he used his charisma to win over a crowd that was keenly focused on Axl’s arrival.
GnR came out and almost as soon as it started I thought, “Why did I think I would love this?” It sounded amazing. Axl’s voice is in top form. I don’t know what he’s doing to keep it there, I hear rumors of oxygen tents. Whatever it is, it’s working. And he’s in pretty good shape physically, he looks like a long lost member of Skynyrd these days, which in my mind is a do-able look for a man my age. I don’t expect anyone to look exactly like they did in 1988.
This quote from from Andy Greene of Rolling Stone sums it up pretty well:
“If you closed your eyes, you could almost imagine you were seeing Guns N’ Roses on the Sunset Strip in 1987. Axl sounded that good. Then you open your eyes, and see a 50-year-old Axl in a black cowboy hat and sunglasses singing alongside some guy named Bumblefoot and you’re brought right back to reality.”
Erm…yes. And to add to that were the visuals. The visuals!! [Raises fist to the sky!] They made me sad. So very sad.
We (the audience, not just Zoe and me) were presented with the most unbelievably generic video and light show, which in my mind was Axl’s way of saying, “I just don’t give a fuck and I’m going to allow my staff to illustrate the supreme level of my not giving a fuck with the absolute lamest Playboy channel outtakes possible mixed in with some flashy colored light stuff from 1995. Remember that band you loved? I ate it. Thank you very much and good night.”
Exhibit A, which btw, is labeled on youtube as “Axl and a bunch of dudes who aren’t Slash playing Rocket Queen.”
Sigh…So as I watched the admittedly gifted dudes who aren’t Slash run around playing Rocket Queen perfectly and as if their lives depended upon it, in front of slow motion stock catalog bikini footage, I realized that in my excitement over Manitoba opening, getting in at the last minute, our awesome VIP passes, the great table we were sitting at, and getting a night out with my partner in crime, that I had forgotten the most important factor: that Guns n’ Roses no longer exists and what lies in its stead is, at heart, a bastardization, and therefore completely heinous, no matter how good it sounds when you close your eyes.
Luckily, oh so luckily, tequila was available. And thusly, I was able to numb the pain and bravely, yet somberly, soldier on like the trooper that I am: 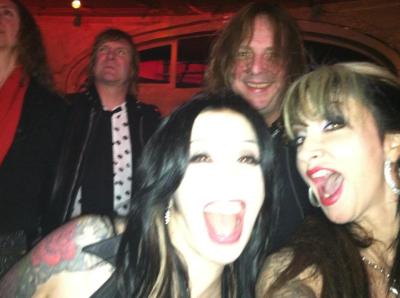 Yes, that is Ross the Boss behind us.
I shall leave you with this palate cleanser: Rocket Queen as it was meant to be seen, along with one aging rock slut’s quiet prayer: Oh dear Axl, please do the right thing and get on bended knee and beg Slash for enough forgiveness to join you at the Rock and Roll Hall of Fame ceremony. We already know Duff has forgiven you, and Steven Adler will show up whether he’s invited or not. And Izzy…Izzy? Are you out there? It’s time to come back in from the beach. The world of rock and roll needs you now more than ever.