Skip to content
A few months later, on October 23rd, 1987 to be exact, Guns n Roses were scheduled to play in NY at the Ritz. It was my birthday and we were all pretty stoked to finally be able to see the band.
We met up at Lismar, of course: Betty, Pete, Glenn Benson, Man Ray, Brian “Cycle Boy”, Donna, Betty’s roommate Lisa, Gini and me in as much rock and roll gear as we could pack on: multiple belts, bracelets, and bootstraps. And because it was such an auspicious occasion, we all took ecstasy. Gini most likely abstained because she was smarter than the rest of us, but I hopped right in there with characteristic enthusiasm. Happy birthday to me! I swallowed a big white capsule of powder with Betty in the bathroom, applied another layer of eyeliner, and hoped for the best.
Two hours later at the Ritz: we all stood in a row, blasted out of our minds and holding hands like toddlers on a field trip. Our mouths hung open as we watched Guns n Roses own the stage in a way that I had never seen before. The lights wound around us and the sound thrummed through my body. The entire room vibrated; the band looked and sounded glorious. They were gods of youth and thunder delivering a rock and roll assault of epic proportions. I knew it wasn’t just the drugs, but they definitely helped the overall mood.
I grinned, turned to Man Ray and shouted over the din, “This is the best band I’ve ever seen!” He said, “Right??? Happy birthday, baby!”
I wished I had spent more time at the bar talking to Axl the singer about Axel the jewelry designer when I had had the chance, but it didn’t matter. Nothing mattered at that moment except the sound and being with my friends.

It was a pretty stellar birthday.

Betty & me in a classic “day-after” pose: 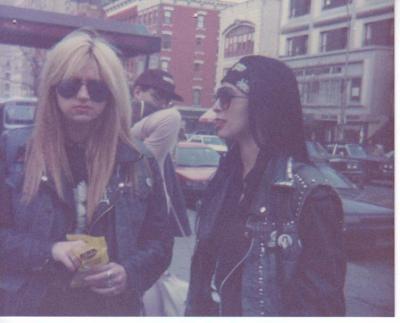 One thought on “A Small Piece from the "Book"”