Skip to content
Life is so intense right now, isn’t it? Some say it’s the energy of the shift, I’d like to believe that and certainly it seems that way. But life is always intense, so I can’t tell for sure.
Drew’s father died this week in a very heavy and unexpected manner. This comes on the heels of his grandfather dying three weeks ago, which was more expected and age-appropriate, and our friend Don Hill who I’ve already written about.
It is Drew and his family’s private story, so in fairness I can’t elaborate as much as I would if it were my own. I can go as far to say that they are devastated, and it is a great marking point in all of their lives.
My own father died suddenly of a heart attack at a young age. He was 47. I was also very young, had just moved to New York, with his help, and was completely distracted by the city. Most regretfully, I hadn’t talked to him for a month or two and I don’t remember the last time I had told him that I loved him. I had been talking to my mother on the phone, my dad was just annoying old dad, sending the checks.
I was shattered in a way that wasn’t immediately apparent. I kept a diary then and the page on his death contains a paragraph about him dying, and then a much longer portion outlining a date I went on the day before. I read it years later and was horrified. There was my deepest fear confirmed in black and white: I am the worst person on the planet. Luckily I had the presence of mind to get a therapist (for other reasons) and he told me it wasn’t that I was evil or vapid, it was that it was so big that I shut down in order to be able to cope.
And indeed, throughout my “deep end” years, I would find myself going hysterical or ballistic over situations with the men in my life, and the rocky road would always lead to dad. As I lay sobbing and drunk on the kitchen floor or smashing my face into someone else’s mirror, it would start with a meltdown over a bad romance and inevitably end up pleading into the air for my father’s help.
Oooohhh. It’s not really about the guy. So that’s how that works.
I don’t lay on kitchen floors drunk anymore and it’s been quite a while since I purposely slammed my head into anything. It’s been over twenty years since my dad died and I have made my peace with it. I worked through my pain and confusion over time, and eventually, when I was able to open up and listen, he came to me in dreams, and in one very crazy meditation I was able to talk it out with him. His life and his loss still color my life, but in a much gentler and sometimes comforting fashion.
So what do you do while you are watching your partner lay his head and hands down on a coffin and sob that broken-hearted and primal sob of deepest pain and frustration? How do you walk someone through an experience where the answers are simply not good enough, and where the people they counted on the most to shape their world just couldn’t be there the way they needed them to be? And now they’re gone and the hope that they will one day repair the damage is shattered. Hope has left the building. It’s a gaping chasm that many of us have to walk through on our own, and it is a long and lonely trek.
I can only kneel next to him and hug him. And sit back and allow him to connect with his family and even friends that I might not be crazy about. I have to shut the fuck up and listen. I am stoic in most painful times in a way that I am not during lesser dramas. Maybe because I shut down when things get too rough, or maybe this time because I can feel the warmth of my own father standing next to me as I sit in a folding chair in a room full of flowers, watching my guy’s family melt down in front of a coffin.
We are not really alone. It just feels like it sometimes in the most excruciating of manners. 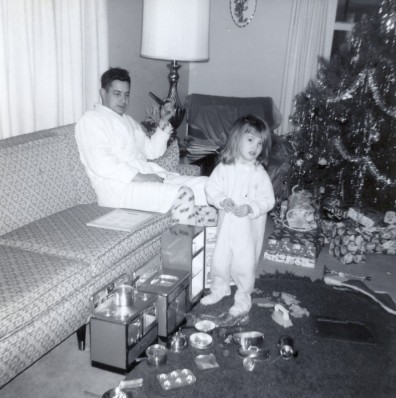