The nice guy says, “Who do you want to see?” And I say, “Okay, I REALLY don’t care if I get back there, but I had intended to run in and say hi to Chris Robinson, and then run right back out to my waiting friends.” He says, “Who is Chris Robinson?” I say, “The singer.” He looks at me blankly. I say, “You know, the one who looks like Shaggy from Scooby Doo? Tell him that Raffaele from the Cycle Sluts wants to say a quick hi.”
“Ooooh! Okay, be right back!” This truly must be the nicest man working security in Northern America.
After a few minutes he exits again and says, “Sorry, couldn’t find him and they’re being very tight back there.” I said, “Absolutely no worries, thank you so much. I feel like a jerk standing here anyway. Have a great night.”
I find my ladies and we make our way back to the parking garage, which turns out to be quite the scene. We are immediately spotted and followed by a rapist in a grey hoodie who keeps saying things like, “Hey. Where ya goin’? You girls wanna party. Hey, where ya goin’? Let’s hang out.” Fortunately he was too fucked up to formulate an effective plan of attack, and when we ran aground of a tailgate party featuring a loud sound system and about 6 or 7 guys who looked like they had grandchildren waiting for them at home, he wandered sad and alone back to his kidnap van.
One of the grandpas, said, “Hey, ladies! Want some beer!” We sat in the car debating this opportunity for a few minutes. I was sort of pro. What could be more entertaining that drinking cheap beer in a parking garage with a bunch of really old Black Crowes fans? I mean, we’d already come this far. Alison is way more sensible than me and hadn’t had anything to drink, so she took the con position. Alex mentioned that she already had a pumpkin ale in the car and Kim couldn’t make up her mind.
Alex didn’t have an opener, and before we could say anything about bottle opening options, she ran to the curb and smashed the top of the bottle, creating the most jagged opening possible.
I screamed and said, “There is no way in hell that you are allowed to drink out of that bottle! Throw it away, immediately!!”
Alex, who is a practicing lawyer and all around super smart and classy chick, said, “It’s cool. I’ve got experience, spent a lot of time with fire-eaters. I can handle a little glass.” This is the look I gave Alison over the back of the seat:

We freaked, Alex insisted, and she did indeed drink out of the bottle. Then she realized she’d lost her flask. We drove around to the venue and Alex went in to search. After 10 minutes she  returned, sad and flaskless.
I said, “We can get you another one.”
She said, “Not this one.”
Kim asked, “Where did you get it, Chrome Hearts? Somewhere expensive, right?”
Alex whispered sheepishly, “Erm…It was Gram Parsons’.”
We all start screaming yet again, and I shout: “GRAM PARSONS?? We just lost GRAM PARSON’S FLASK?? Are you fucking kidding? You have to go back in there and get it.”
Alex assured us that she had done a thorough search and it was gone, and we all mourned the fact that it was not only gone, but picked up by someone who will never know its true value. I pray it wasn’t stoned beer jerk. Alex took another sip of her extremely dangerous beer, and we clucked sadly. What a loss.
Next up, a late night dinner with a bottle of red wine, and a waiter who was so impressed with Alex’s determination to drink that glassed up ale that he strained it for her into 4 glasses. Yes, I drank it. I’m not proud at 1 am, puffy with PMS, coated in some asshole’s cup of Budweiser and refused at a backstage door. Who am I to say no to a little glass infused pumpkin ale? This is the bottle, sitting on our table prior to being carted off by a very indulgent waiter: 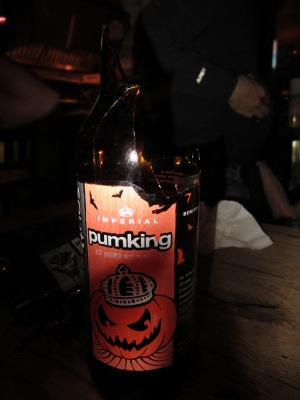 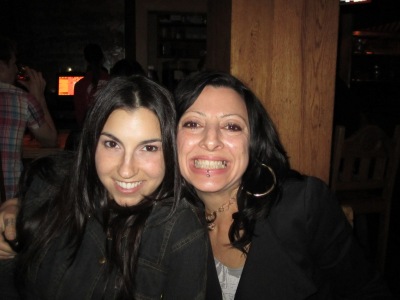 Alex and me. My tongue is yellow from drinking shitty beer for three hours:

And lastly, back to Kim’s kitchen, where I ingest half a painkiller that had been hanging around in my bag since my birthday, and within minutes am floating on a mild opiate haze, which no doubt is the reason for the focus on this photo:

We spend the rest of the morning drinking French wine and dancing to songs of Kim’s choosing. We danced and danced and danced until 7 am. Each time shouting, “Last song and then we’re going to bed!” But the songs sounded so good, we just couldn’t stop. 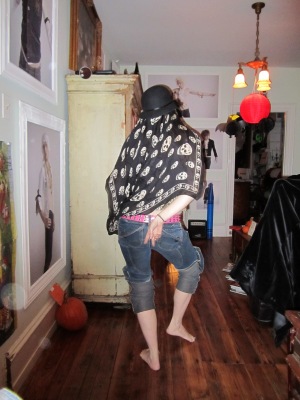