Skip to content
As much as I hate what New York has become, there are still New York-ish moments to be had, which I cherish all the more now that they are so rare.
Last night one of my new kitties, Albert, who is ordinarily a perfect angel in cat form, (see visual below for confirmation of angelic status) freaked  out and began trying to pee everywhere. Which of course caused me to freak out, because A) Cats peeing anywhere other than the litter box is a bad, bad, baaaaad thing, and because B) Although he was trying, nothing was coming out and he was very obviously uncomfortable, which led me to believe there may be a blockage, which is quickly fatal to cats.
Angel in rare moment of repose: 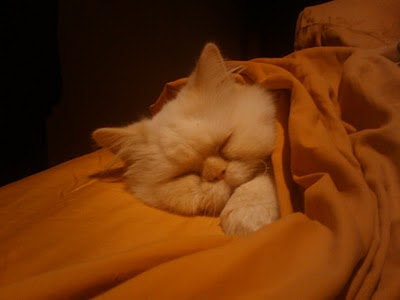 One thought on “Kitty Cab”