Skip to content
So far it’s been pretty fabulous.

New Years Eve found us at Mike’s delightful duplex in Greenpoint, one of my favorite places in the world, high praise indeed considering it necessitates traveling to Brooklyn. We drank champagne, ate hallucinogenic mushrooms, fought over the music control, and rolled around giggling on the couch and floor in front of Mike’s fireplace. Meanwhile, another crew of friends sat in the dark in his downstairs entertainment room, staring for hours at live footage of the Talking Heads.

Talking Heads? Even without the aid of mind-altering substances this would bum me out. Occasionally I would have to leave the cheery glow of the Christmas tree to use the bathroom downstairs, and every time I went down there I came back with reports of a spooky land in which the music sucked.

Mike, who loves an awful thing that Drew likes to call “Awkward Pause” music, explained that he loves the Talking Heads and that one time when he was too high on one thing or another he put them on the sound system and it made him happy again. So I guess this is what he did for his friends who like to sit quietly in his basement at every party.

Mike also explained that his friends come in two groups: Uplanders and Downlanders. The Uplanders, of which Drew and I number) prefer to stay in the light of the kitchen, fireplace, or backyard, while the Downlanders would rather watch his giant flat screen tv in the dark. He is comfortable in both lands, since they each belong to him, and thus he happily has feet in two worlds. We all thought this was very deep at the time but of course, we were on drugs.

I thought it hilarious to text him any time I felt the need, as any experience that involves mind-altering substances must have the comfort and joy of Mike’s presence nearby at all times. These are the texts that came out of the night. He never responded but would always come back eventually for more of my abuse.

2:06 AM: Have the ducks stopped quacking Michael? Have they?

I know, I know. Pretty intelligent stuff. But my justification for this kind of stupidity is that mushrooms are a cheery and easily controlled substance with little damage to the body, and indeed we did have a lovely New Year’s Eve celebration, giggling with some of our closest friends in Mike’s beautiful home. It was one of the best I’ve had in many years.

This welcoming of the New Year with people I love helped with another peeling of the layers of my onion psyche. I am am somewhat loathe to put it down because I feel like I have beaten the subject of beauty down to a pulp, but it does seem to always be on my mind and my friends’ minds  as we watch ourselves age. So I thought I would share this:

He replied with something very nice about timelessness, and I did understand that I was whining over something pretty unimportant in the grand scheme of things. But it is there. And my struggles with having to spend time around the hordes of models that trail his last couple of bands (with well known male model singer Jamie Burke) has also been documented here.

I have made my peace with it as I have grown to trust my boyfriend, trust being something I’ve never had in my life up until now. But it still sucks to let him out of the house sometimes when I know he’s going to spend the night surrounded by some of the world’s most beautiful

(and often very willing) females less than half my age. It’s been an interesting experience over the last few years, and I’m proud of myself for working through some very deep issues connected to the situation.

Occasionally we have model castings in the store and there was a doozy this week. Three days of hordes of the most gorgeous young women you’ve ever seen, all lined up and hopeful with portfolios in hand. Each one was stunning–so tall and sparkly and  young, it felt like an invasion from another planet. I simply couldn’t get too worked up about my own insecurities standing near them because en masse they are alien. I am another species altogether. One of my boobs is as large as one of their tiny doll heads.

The kicker: the job was non-paying. And the photographer is completely out of his mind and was screaming at them: “TURN AROUND! WILL YOU ALLOW US TO PHOTOGRAPH YOU NUDE? CAN WE SHAVE YOUR HEAD?” Just totally obnoxious for the sake of being crazy and obnoxious. And then when they were finally done with the first day’s group I overheard him say, “There were no stars. No stars! Hideous, AWFUL girls!” So these individuals fixed themselves up, picked up their books, and took transportation in freezing January to stand in line for an hour, get abused about who they are, and then leave empty-handed. What a crappy afternoon.

Every one of the girls, and they are girls, most of them not yet 21, was absolutely beautiful. Even if she wasn’t perfectly beautiful, she was. If you know what I mean. And no matter how pretty you are, it must be excruciating to be rated and rejected many times as part of your chosen profession. I know that it would crush me at my age, with whatever wisdom and self-confidence I’ve garnered from the simple passage of time. What must it do to your psyche when you are 18? I know they get the breaks and perks that come with beauty, which are mighty, but once you get into NY and into that competition, it has to have some effect.

So I missed the last casting on Friday as I left work early. Vas and I went to see our old friend Eerie Von do an acoustic set and book signing at Generation Records for his new book Misery Obscura. If you are a Misfits, Samhain, Danzig fan, or if you just love that era, you MUST pick this book up. It is SO fun to look at and EV saved everything over the years, so there are some really fun photos. And he is hilarious so the text is pretty funny. The acoustic show was great, and he’s thinking about expanding that with a slide show, which I think would be amazing.

Afterwards a 22 year old model who I’ve recently become friendly with, who generally does very well for herself, and who I’ve blogged about before, texted that she wanted to hang out. It’s weird, for as much as I complain about the omnipotent NYC presence of the gorgeous foetus, they’re always wanting to hang out. Rocket says it’s like ducklings imprinting on me. I really like this one though, she’s smart and interesting.

So I told her that if she didn’t mind hanging out with the ancients to come and meet EV, Vas, and myself at the bar. She did, and Eerie thanked me for providing something wonderful to look at, and then just to be a dick asked if she was my daughter. I punched him and we got down to the task of drinking and reminiscing. It was a wonderful night, although I did have a pretty brutal hangover the next day from too many celebratory shots. I also have a vague memory of doing a “sexy” dance to Def Leppard, which is never a good thing no matter what your age.

At the beginning of the evening I complimented my model on what had to be a $4000 jacket and asked how her career was going. She always has the most amazing clothes and I’m incredibly jealous, although even if I did finally manage to wrangle something off of her I’d never in a million years squeeze into it. She told me that she got dropped from her US agency because of weight issues. The girl is a twig. She literally looks like you could snap her, she even looks like Twiggy. I said “What???” She said, “I was 95 pounds when they signed me, but I gained 20 pounds and that was too much.”

She didn’t seem too broken up about it, she’s creative and has a brain and other things going on, and said she’s fine in Europe. But she did confide in me about experiencing some pains that are classically the kind of crap you contend with when young; and that coupled with seeing the casting at my job seemed to be a good reminder for the new year that the grass is always greener. And that once again the lesson for me is to suck it up, stop whining and enjoy all I have, which is substantial.

And there is some relief in allowing myself to step out of the race when I’m standing next to someone who truly could be my kid. In some ways it felt nice to sit back and let her shine for the people around us. Hmmm…maybe old age will be a relief one day.

So that’s where I’m at in the beginning of 2010, as I continue to work to relax into my life and age. The less panicky  I become, the more I can see that these people that I have felt so insecure about in the past have their own lives to contend with. Our personal worlds orbit around ourselves so tightly that it’s often difficult to see what someone else is going through. It’s so important to remember that we’re all human and to have compassion for others’ journeys. I love my life, with all of it’s flaws and dramas, and I wouldn’t change it with any one of theirs. 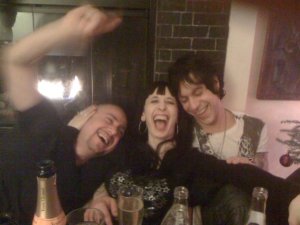