Mike and I took a stroll on Ludlow last night and it’s worse than ever. Seriously, they should just change the name of the street to Fraternity Row. And I know my boss is partially responsible for the Sex and the City wannabes roaming in herds and squealing at each other at extremely loud decibel levels, so in some strange way they’re actually paying my salary, but I would like to take a tazer with me and just zap each one of them as I stroll along the crowded sidewalk. How satisfying would that be??And speaking of bad fashion, I’m not really a fan of Cathy cartoons, but this sums up the industry completely:

I’m in this weird gray area where I work in fashion but I’m a rock chick. So my rock and roll friends think I’m super fashionable and my fashion co-workers think I’m just rock and roll and don’t give a shit about fashion. Are the two mutually exclusive? In some ways, they should be, because fashion, as much as I love it, is retarded. It starts out as art, i.e., someone’s love of beauty and/or form translated into a garment, but it ends up with people paying far too much for status items, which to me is kind of sad. Plus it encourages and supports asswipes like this guy:

Blech.But rock and roll is about an image as well, and often dictates fashion. Or at least it did before everyone started looking like this: 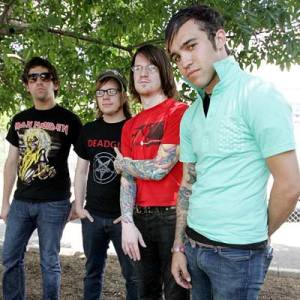 Mmm… break me off a piece of that! NOT.
Aaaaand, in other random Raff brain news, I’d like to lodge a complaint about the feature on myspace that allows you to block all mail from people not on your friend list. I often get mail from people that I can’t answer because they’ve chosen that setting. It’s so dumb. You spend 10 minutes writing a response and then it won’t go through. Cut it out people! Or at least stop writing strangers not on your friend list!And lastly, my friend Janet gave me this tiny book last year, knowing about my weird love of all things Posh, and every time I see it sitting on my dresser I think it should be shared with all of you. I would carry it in my pocket as the title suggests, and whip it out at parties to share with friends and family, but it must be preserved in it’s pristine condition. So it stays home. But I’ve got a little time this morning so I’ll scan a few pages for you.

This is pre-boob job and Beckham, but it’s still awesome. She’s so mult-faceted! And now I know not to take her to a Japanese restaurant after we go shopping together!

All right. Gotta go get my nails done. Posh likes a nice manicure.